2nd and 3rd of March 2013 saw the annual ARRL DX 48hr  Contest. This contest is maybe one of the easier contests in respect that we can only work Stateside/Canadian stations. Basically point beam to 300 degrees and call !! 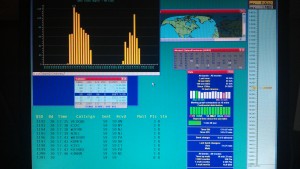 I decided due to lack of operators to limit our involvement much the same as last year trying to optimise running time during daylight instead of cramming onto 40m in the night with most stations working splits ie. listening above 7.200 and operating below as you know states have a higher 40m band plan, it is allowed to receive on lets say 7.210 and call on 7.180.

Anyways back to the crux of the matter, so i tried to run much the same as last year when we ran with just myself and Jeremie which was productive always busy running when we was operating, culminating in 1st in UK, 16th in Europe and 29th in world for 16 hours operating!!

We kicked off on Saturday about 10:30z starting on 20m as you can see from picture things were steady most of States still in bed hi hi !!, and propagation a bit flat .Also we had our friend Murphy in shack as pc kept muting the auto voice keyer!! Mark (m0zle) and I managed to sort it while I was doing cartwheels around shack…Steve (m5zzz) took over but had to leave as did Mark at just before 13:00z . At this time i switched to 15m for a marathon run which would last for nearly 5 hours at mic, during first hour I worked 122 stations the pile up was nice and steady ebbing and flowing, if at peak of flow it had carried on during 13-14:00z I peaked at 260 qso an hour average on run rate but unfortunately it didn’t continue hence 122 qso much to Sys’ disappointment!!

Steve then took the reigns at just after 17:00z for his ‘Jedi’ training with me resting voice and a much-needed comfort stop !! Dropping back down to 20m to try to achieve some more multipliers (each state/province is a mult) saw rate drop but not to unacceptable levels so we carried on until about 20:00z then switched to 40m due to a technical hitch which was out of our hands ……We stopped not long after just as 40m started to open but problems persisted so we sacked it feeling very frustrated !

On the Sunday I started about 09:45z on 20m and we stayed on 20m all day to pick up more mults and hopefully to get a nice run rate as we had worked a lot of stations on 15m the previous day…Run rate was steady to say the least with Steve arriving to help at 12:00z after his news-reading.Steve unfortunately had to go again so it was up to myself to perform …Our second biggest peak run occurred at 15-16:00z with 110 being worked in the hour then things started to slow up just a bit but was ready to work into the night with the dreaded drop down to 40m !! Unfortunately this was not to be as  problems out of my control scuppered this and had to surrender my pile up at 17:30z ….Hopefully since, this the problem will not occur again !

My thanks go to Steve for giving me quite a bit of time and patiently listening to my advice I gave resulting in a more relaxed operator in chair and a higher run rate for himself !! Well done mate, you are truly on your way to becoming a Jedi master !!

I hope you enjoyed my first attempt at being an author any comments are welcomed !!