Saturday 15th March brought about one of my personal favourites in the contest calendar ,this along with ARRL DX are in my opinion more fun…As we will see things nearly went to plan apart from the huge CME that was as the contest started hurtling its way towards good old planet earth… ‘thanks for that Sol’!!

Well, things started off great with the blocking of the frequency we intended to use at start of the contest . I started calling a general CQ at 11:00z beaming Russia 50 degrees ish and this is where the fun began. First caller in the bag a YV (Venezuala) on the back of beam, glowing report recieved I reversed the beam to beam him +30-40 over was reply  ‘good’ I thought ‘bands in cracking shape’.  Next caller in was a nice gentleman driving the length of Florida going home for the weekend as I rotated to him my report from him was I was endstopping him, he was +30 to G5FZ so far so good. Steve took over to continue blocking as the clock was ticking nosebag to be had and tea to be made before kick off …….now in my humble opinion just before a CME lands the bands seem to become ‘wide open’ whether i will be stood corrected I don’t know but every time a coronal mass ejection is 12hrs or so out good dx is to be had for hardly any effort or RF output and please don’t ask why this is just my experience as a humble op lol !!

In RDXC the rules are simple work everyone but the more Oblasts (postcodes) you work of Russia the bigger the mult. Working Russia gives 10pts +any oblast mult,a qso with your own country 2pts,a qso with a different country but on your continent 3pts and a qso with another continent (ie Stateside) 5pts….And the contest lasts 24 hrs no long haul this time !

We kicked off at 12:00z with myself on the mic, and as some of you know, if its slow i get bored and fed up quickly so Steve(M5ZZZ) took over and was more relaxed than I’d ever seen on a mic !! With a nice and steady start I made the decision to move band to 15m as qso rate was good but not excellent which we did with some good results , peaking in the first hour with 117qso which cant be sniffed at.Mark (M0ZLE)arrived at just before 14:00z with Steve leaving as himself and I where going to be pulling a late one ….Staying on 15m was producing results as you can see. While working an OH(Finnish) station the whole band blacked out +30-40 of noise he kindly waited to finish exchange  but it was an ominous reminder of what was on its way !! 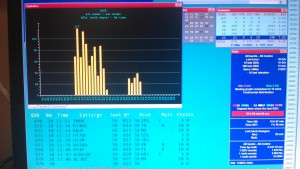 We remained on 15m until it was felt we had wrung the band dry at roughly 17:00z we moved on to 40m which some might say suicidal , thats  too early i hear you scream in droves, maybe, but this is where the fun begins. Russia is 3hrs ahead and already in darkness working JA, VK, etc the move payed off ,then Mark left as Steve had duly arrived for our late shift ! . I left Steve to nip to local kebab emporium for a tasty snack to bring back to Aisthorpe…

When I arrived back we had a visit from Pam (G4STO) who sat with us for a bit and watched me demolish said mixed kebab ! Around this time 40m was starting to get overfull with people setting up on us and calling which is normal for a contest but really peeves me off !The decision was made to now jump up to 20m as we was entering grey line and I felt we could run a bunch of stateside for an hour or two…

The move payed off for the first hour but the band was dying earlier than of late and we moved reluctantly back to 40m about 22:30z but finding a ‘home’ was difficult, and the run rate was very poor ,plus  the qrm was appalling +20 with all the bells and whistles on !! Stateside had at this time just, just, just started to open working my friend Walt K1QS. A special mention for Walt K1QuiteSexy as he managed to work us on every band we run on and as always a cracking signal !!  Appreciated, thanks buddy !! We surrendered at 23.20z as Steve was having to go and I knew that I wouldn’t last all night, so we left  with a heavy heart knowing full well that the bands would be poor the following day….

I arrived at shack at 6:00z on the Sunday and firstly checked progress of CME which landed at 06:01 that morning and I hesitantly turned on my trusty steed , cursing myself for going home to my warm bed . My curses increased as I monitored 20m and normally strong stations where very weak  and the band reports where far from rosy !!

A quick cup of tea and biscuits later and off we went for a second day which was that slow I had to fight myself nodding off , luckily Steve turned up at 8:00z and we started swapping knowing full well we had to run 20m and 10m to collect the mults. We continued to soldier on and at 11:00z  dropped onto 10m to see if there was life and much to my amazement there was but working them was hard labour best dx on 10m was HS0ZIN who said he would be thankful when 12:00z came!! He was our second to last caller as sitting and cq’ing was getting nowhere and we had searched and pounced all we could pulling the plug at 11:46z .

Overall a good result working 978 stations 140 Oblast and 128 Dxc for an overall score of 1,598,084 operating for a total of just over 16hrs a good effort overall we bettered our score from last year which was 443 qso for 362,780 , if before the contest knowing the cme was on its way and you had asked me what I would be happy with I would of answered 1,000 qso. I wasn’t far wrong and yes I am still cursing our luck.!! !

Thanks to my operators Steve and Mark for your time !