After serious thought on the layout of the components on this Linear Amp especially the placement of the filament transformer and the position of the RCA 813 valves for cooling, I decided that the best thing to do was to remove everything and reposition it better within the chassis. Initially my thoughts were to sort the amp out and get it working keeping the same layout, but as I progressed I was not happy with the layout, so this has now actually turned into building a 1kw Linear Amp from some recycled parts as I am now modifying a lot of the old amp. 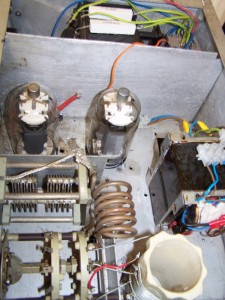 The plate choke is being replaced with a better one that I have made which has considerable more inductance and a very low self resonance frequency achieved with the insertion of a ferrite rod in the middle of the choke.

The valves are going to be moved to where the filament transformer is presently located and a fan fitted into the back of the chassis behind them sorting out my concerns about proper ventilation and while doing this, the vent in the front is going to be closed off and more ventilation put on the top of the amp. (You don’t want warm air blowing in your face when you are operating.)

The PA tank coil is being replaced as I have found a better design that enhances the 10M band which is the Achilles heel of the RCA 813 Valves due to the high inter capacitance of the electrodes in the valve. Using the new coil design should make it possible to get better power on the 10M band.

The last change to the amp is to replace the ceramic band switch in the PA as it is HUGE and takes a lot of room up, this will be replaced with a suitable smaller ceramic switch which I already have.

Although this may seem a lot of work, in the long run it will make the amp better and easier to work on and I only wish I had started the project with this concept rather than follow the original build. I shall put it down to experience and now go forward with the project in a positive manner.

For anyone thinking about building a linear amplifier a good starting point is the Matt KK5DR Website.