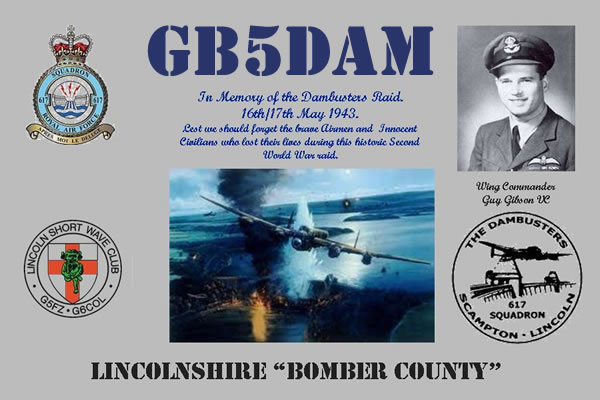 OPERATION CHASTISE
On the 16th /17th May 1943 19 Lancaster bombers of 617 Squadron RAF took off from RAF Scampton in Lincolnshire armed with the now famous Bouncing Bomb invented by Barnes Wallis. The raid was led by Wing Commander Guy Gibson VC The aircraft took off in three groups, Group One led by Gibson took off in three waves of three aircraft at ten minute intervals starting at 21.39,, their mission was to attack the Mohne and Elder dams. Group Two consisting of 5 aircraft took off at 21.28 taking the longer northern route to attack the Sorpe dam. Group Three also consisting of five aircraft took off later at 00.09 they were a reserve group if the Mohne, Elder and Sorpe were breached they were to attack the Lister, Ennepe and Diemel dams. The code words sent back in Morse code to the operations room in Grantham were “Goner” meaning bomb dropped “Nigger Gibson’s Black Labrador who was run over by a car on the evening of the mission” meaning the Mohne was breached and “Dinghy” meaning the Sorpe was breached. Five bombs were dropped before the Mohne was breached. The Elder dam took three bombs to breach it and Sorpe despite several attacks was only slightly damaged. Only eleven aircraft returned to Scampton out of the nineteen aircraft which took off.. Of the survivors, 34 were decorated at Buckingham Palace on 22 June, with Gibson awarded the Victoria Cross. There were five Distinguished Service Orders, 10 Distinguished Flying Crosses and four bars, two Conspicuous Gallantry Medals, and eleven Distinguished Flying Medals and one bar. The Lincoln Short Wave Club shack is less than 1 mile from RAF Scampton 71 years ago you could have watched the aircraft take off and count them back in again.

The Memorial Station will be active on 40 & 80 mtrs from 2100 hrs on Friday the 16th May till 0900 hrs on Saturday the 17th of May from the LSWC Shack in Aisthorpe and any club member can operate the GB5DAM station as it will be a relaxed and informal atmosphere.