I met Steve M5ZZZ at the shack at 0830 on Saturday to pick up the equipment for Boultham Park Fair; why do we always leave everything we do to the last minute? I got there early so emptied the shed to get to the generator then, after getting the generator out, replaced everything I had got out only to see the white board we needed behind what I had put back, it stayed there! Both cars full we set off for Boultham about 0850.

We arrived at Boultham Park soon after 0900 where Tom G4OSB and Ian G4EVK were waiting for us; it wasn’t long before Peter M0EJL, Andy M6LCN and Roger G3PVU with his grand-daughter Laura, arrived to help. We soon got the Coleman shelter up shortly followed by the mast. 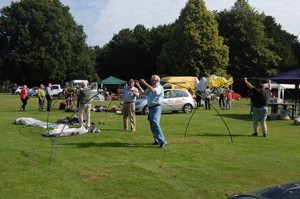 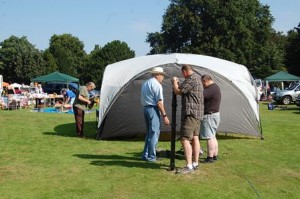 Radio connected Peter was the first operator followed by Andy, then Tom on CW.  Do we have a prospective licencee with Laura seen below having a tune around. 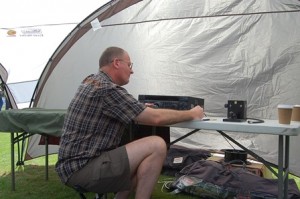 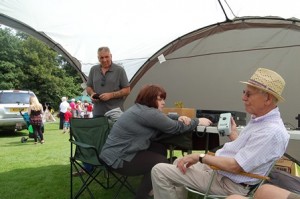 We were privileged to have a flypast by a Spitfire: 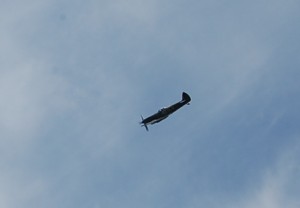 Other members and former members that visited the station were Jim G0EJQ, Don M0CES, Pete G8HMZ and Derek & Kath Seeds. If I’ve missed anyone out sorry.

1500 hours arrived so we decided to pack up, that is Tom, Peter, Roger and Pam.  Pam is sorry but she was not able to cart stuff to the shed or up in the loft so left them in the shack for someone else to put away!!!

Since posting the above pictures I have received another two photographs the one on the left shows most of us just sit around drinking tea and coffee and the one on the right shows we didn’t check the mast to make sure it was straight!!    It also shows we had an almost cloudless day. 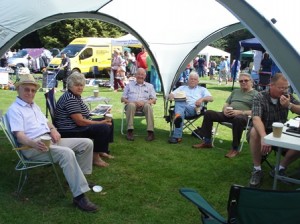 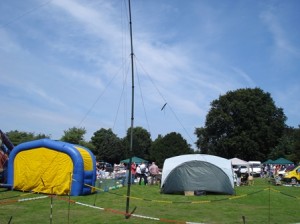