Wednesday 21st saw the LSWC hold their annual Construction Contest for the Joe Rose Memorial Trophy. Last year saw us two different versions of ATV transmitter. One being for home use including a partly assembled water cooled power amplifier (For an update see below) built by Adrian M0NWK. The second, and also the winner for last year, being a fully portable transceiver in a case built by Jason G7KWP.

This year Started off with a similar theme. Adrian M0NWK, started off by showing us his Arduino powered controller for a comtech 23cm ATV transmitter. 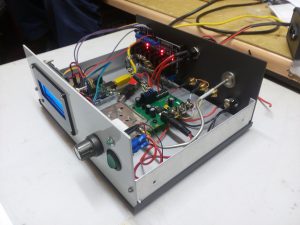 This was achieved by removing the dip switches from the transmitter and replacing them with a SSR (Solid State Relay) board. These relays are then controlled by the Arduino which also shows the selected frequency on the front LCD. 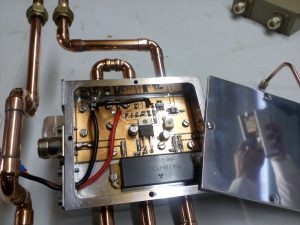 Next up was Andy G0FVI. Who has constructed an 80m CW receiver which will eventually become a transceiver in time. By choosing an IF of around 10.695 this allowed him to use bits from numerous scrap 11m radios he had laying around. 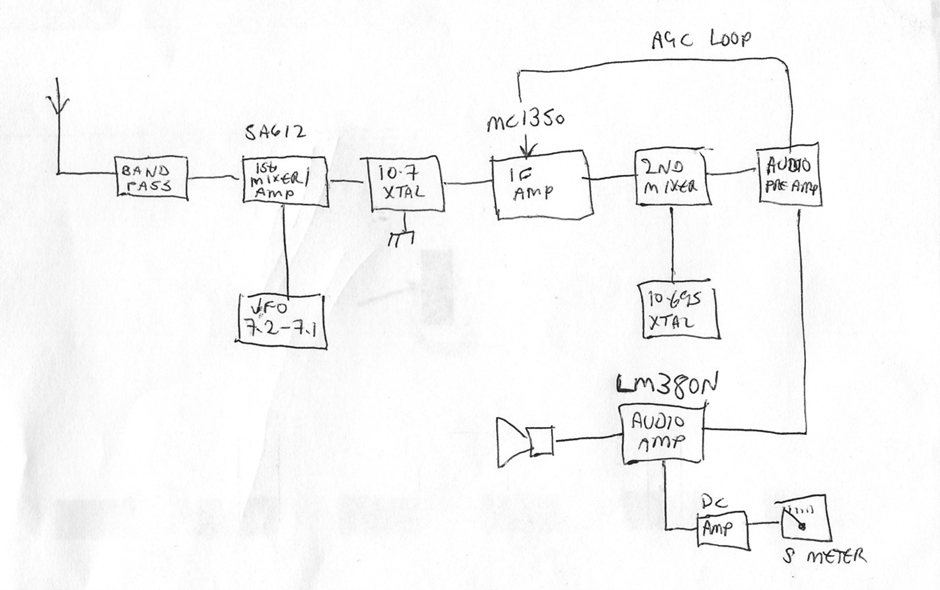 All stages were built and tested using a sig gen/scope etc. before being connected. Great care was taken with the construction of the VFO, whose spectral purity I was finally able to look at using an SDRplay RSP1A and a beta release spectrum analyser app.

When I complete this I will add a prefabricated board for PA and some TX/RX switching (should just about fit). I will sample VFO and mix with TX XTAL oscillator, add some filtering and off to PA. Might be an idea to have a go at matching XTAL filter in the receiver too. 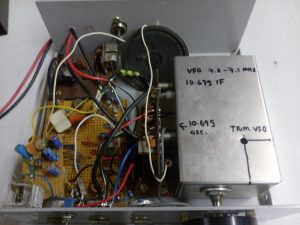 Next up was David G6MAF. Who had constructed a RF tap, or signal monitor which covered 2-30MHz. A device like this is very useful for monitoring your own transmissions by connecting straight into the feed line. With 50 ohms through to the antenna from the transmitter, a second output is taken and attenuated for feeding into a device such as a spectrum analyser etc… 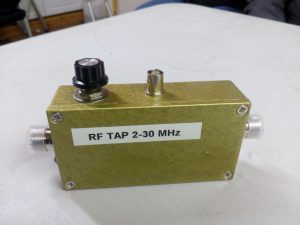 For the final item we made full circle as Bob, G4PDF, showed off his portable 5GHz ATV Transceiver. The equipment was all installed in a box which was mounted to the back of the dish which was then fixed to a tri-pod. The transceiver included a screen overlay showing his Callsign and also converted a received GPS signal into a locator which is also displayed. 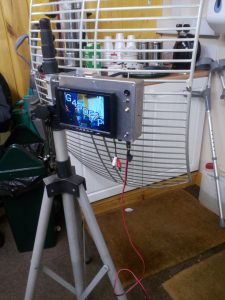 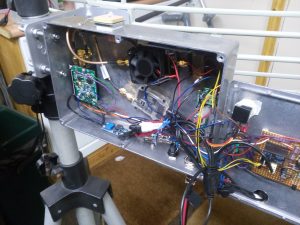 It was at this point after all had builds had been shown that contestants left the room for the remaining to vote on who’s they thought was the best. After discussions about complexity, imagination, modules or scratch built & uniqueness, the vote was in.

The contestants were called back in and the Winner was…… Bob G4PDF, with his 5GHz ATV.

The trophy will be awarded at the clubs AGM.