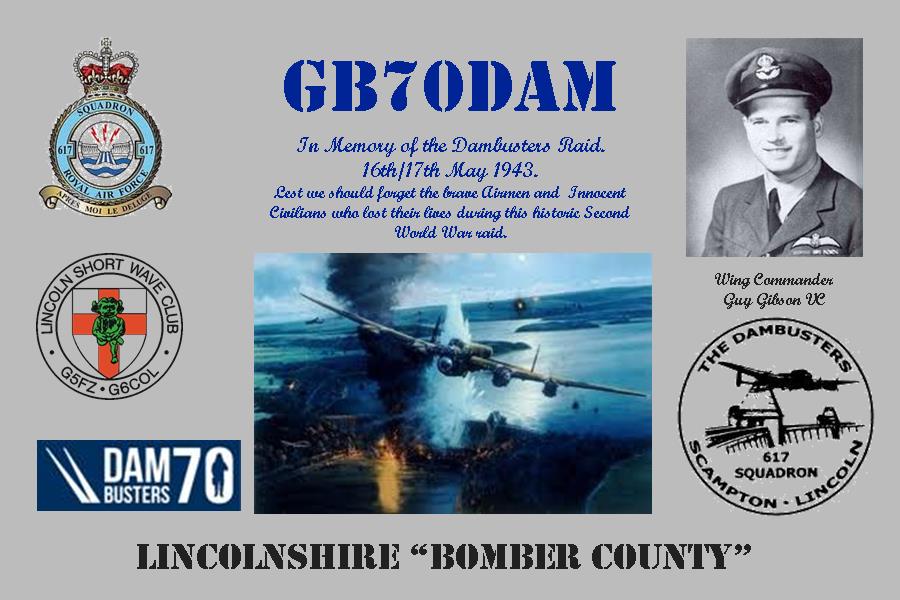 OPERATION CHASTISE
On the16th/17th May 1943 19 Lancaster bombers of 617 Squadron RAF took off from RAF Scampton in Lincolnshire armed with the now famous Bouncing Bomb invented by Barnes Wallis. The raid was lead by Wing Commander Guy Gibson VC The aircraft took off in three groups, Group One lead by Gibson took off in three waves of three aircraft at ten minute intervals starting at 21.39,, their mission was to attack the Mohne and Elder dams. Group Two consisting of 5 aircraft took off at 21.28 taking the longer northern route to attack the Sorpe dam. Group Three also consisting of five aircraft took off later at 00.09 they were a reserve group if the Mohne, Elder and Sorpe were breached they were to attack the Lister, Ennepe and Diemel dams. The code words sent back in Morse code to the operations room in Grantham were “Goner” meaning bomb dropped “Nigger Gibson’s Black Labrador who was run over by a car on the evening of the mission” meaning the Mohne was breached and “Dinghy” meaning the Sorpe was breached. Five bombs were dropped before the Mohne was breached. The Elder dam took three bombs to breach it and Sorpe despite several attacks was only slightly damaged. Only eleven aircraft returned to Scampton out of the nineteen aircraft which took off.. Of the survivors, 34 were decorated at Buckingham Palace on 22 June, with Gibson awarded the Victoria Cross. There were five Distinguished Service Orders, 10 Distinguished Flying Crosses and four bars, two Conspicuous Gallantry Medals, and eleven Distinguished Flying Medals and one bar. The Lincoln Short Wave Club shack is less than 1 mile from RAF Scampton 70 years ago you could have watched the aircraft take off and count them back in again.

On the 16/17th May 2013 the Lincoln Short Wave Club are operating a Special Event Station in memory of the Air Crew and German civilians killed during the now famous 617 Squadron’s raid on the great Ruhr dams of Germany. The station will be on RAF Scampton’s bomb dump which is where Barnes Wallis’s bouncing bomb would have been delivered on 16th May 1943. The station will start at 15.00 local time on 16th May 2013 and transmit through the night on 40 and 80 metres 3.617 MHz band conditions permitting. Transmissions will cease at 15.00 local time on the 17th May 2013. A sked has been arranged with an amateur who will be visiting the Mohne Dam on the 17th probably the first time a qso has taken place between the dam and RAF Scampton since the raid. A very special Limited Edition QSL card will be available of the Dambusters raid details on QRZ.com

Latest Update: Operations will now start on the CW DX section of the 40mtr band at 1300 UTC.  Ian G4XFC will operate for at least 1 hour +- pileup , when 80 opens about 20.20 UTC when the first wave would have been taking off we will use 3.617 will also transmit at some point on AM. We will also be sending a signal via 23cm to GB3VL to allow video to be broadcast via the BATC stream .